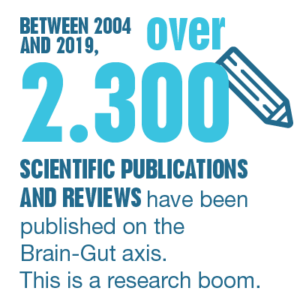 The Brain-Gut axis is a health concept that started to spark some interest as early as the 1880s, when scientists and clinicians perceived a relationship between the brain and the gut, along with the gut’s resident bacteria.

As research progressed, there was additional evidence of this bidirectional communication which intensifies in times of stress. The Brain-Gut axis is mainly composed of three pathways: the neural pathway (enteric nervous system and the vagus nerve), the neuroendocrine pathway, and the immune pathway. The gut is sometimes referred to as a “second brain”, as it hosts the enteric nervous system (ENS), a 300 million-nerve strong neural network allowing the gut to work without instructions from the brain [Liang, 2018]. The ENS controls the digestive system and plays an important role in peristalsis, secretion, and pain perception.

Brain-Gut axis and the microbiome relationship

The gut also provides food and shelter for the gut microbiome. As laboratory techniques and “omics” evolved with time, scientists have now a better understanding of these microorganisms. Current evidence indicates that the gut and its microbiome work together to affect immunity, endocrine functions, gut functions, and neurotransmission; the evidence continues to multiply. For example, recent research suggests that a high-fat diet may have a negative influence on both the gut microbiome and the brain. As well, a diet rich in saturated fatty acids can have detrimental effects, not only on the gut microbiome – characterized by lower diversity in gut microbial species – but also on brain function, inducing depression-like behavior [MyNewGut project].