The power of psychobiotics on the Brain-Gut axis

Psychobiotic is a term used in preliminary research to refer to live bacteria that, when ingested in appropriate amounts, might confer a mental health benefit by affecting microbiota of the host organism.

The benefits of probiotics for the BGA are described in several studies and meta-analyses for their effect on mood, anxiety, depression and early-life stress. A recently published meta-analysis looked at 27 probiotic or symbiotic interventions and showed a significant improvement in depression and anxiety [Liu 2019]. It is important to note that the benefits are not homogeneous for all the probiotics tested, but are strain-dependent, which is the case for most of the beneficial effects of probiotics.

What is the current state of research?

The clinical research on BGA is very heterogeneous, given that stress is a risk factor and a consequence of many modern diseases. This heterogeneity is why research is conducted on a variety of people: healthy people as well as people suffering from depression, chronic diseases or neurodegenerative diseases, and on ageing people. Some conditions, such as Parkinson’s disease, have promising preclinical data but no clinical study results at present. 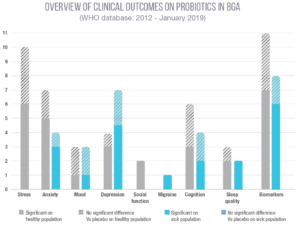 From 2017 to mid-2019, 66 clinical trials targeting the BGA with probiotics were registered. Currently, the most frequent areas studied are stress and anxiety, but other areas include severe depression, cognition, autism, and Parkinson’s disease. The techniques associated with these studies are also evolving. Researchers use professionally validated questionnaires and biomarkers such as cortisol, as well as brain imaging, which reveals the regions of the brain being stimulated and what this means. Research teams are also exploring ways to study the brain without using invasive techniques. We estimate that 42% of ongoing research is funded by private companies. This shows that both academia and private industry are investing in this research and working collaboratively. 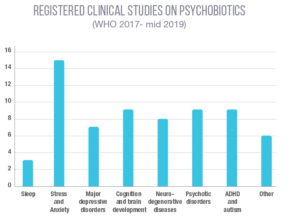