CEREBIOME® is the most documented psychobiotic with 5 clinical studies among which the first-ever human clinical study involving healthy stressed adults and probiotic intake.

Diop 2008: The first study demonstrating the effect of a probiotic on stress-induced gastrointestinal symptoms

75 healthy volunteers (18-60 years old) with at least 2 symptoms of stress were enrolled to take CEREBIOME® or placebo for 3 weeks. The study showed a significant reduction of stress-induced gastrointestinal symptoms as assessed by 62 criteria.

Messaoudi 2010: The first study that demonstrated the positive impact of a probiotic on occasional stress in healthy humans.

This gold-standard study (randomized, placebo-controlled, and double-blind), was conducted on 55 healthy volunteers (30 – 60 years old) for the intake of CEREBIOME® or placebo.

After 30 days of intake, a significant reduction of psychological stress as assessed by HSCL-90 tests (validated questionnaire) was shown in the CEREBIOME® group. These results were correlated to the significant decrease of cortisol, a biomarker of stress. In less stressed subjects, significant improvement of PSS score, HADS scores, and anxiety/depression score in HSCL were demonstrated in a post-hoc study [Messaoudi 2011].

This was the first study conducted with CEREBIOME® on depressed participants. This gold-standard study demonstrated that CEREBIOME® significantly decreased dry mouth and sleep disruption (p<0.05) compared to the placebo group.

Kazemi 2018: Depressed participants with ongoing treatment (for at least 3 months)

This randomized, double-blind, and placebo-controlled study included 110 patients suffering from mild to moderate depression that were receiving antidepressant treatment.

The probiotic was used as an adjunct therapy to conventional antidepressant treatment and showed a significant decrease in Beck Depression Inventory (BDI) scores, from 18 down to 9 on average. These results are clinically significant, showing that the patients, after treatment with CEREBIOME®, were now categorized with “minimal depression” according to the validated assessment scale. Additionally, the CEREBIOME® group showed a decrease in the blood kynurenine/tryptophan ratio, which suggests that tryptophan was diverted toward the synthesis of serotonin and away from the inflammatory pathway (p<0.05). 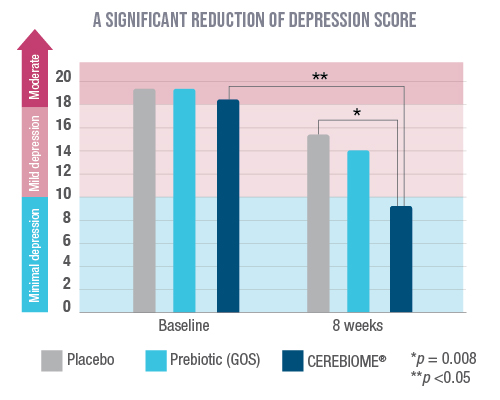 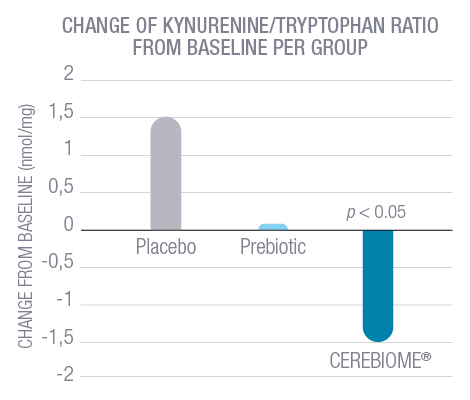 An open-label study by Wallace and Milev found that in treatment-naïve patients, CEREBIOME® had a positive effect on mood, anxiety, anhedonia, sleep quality and perceived stress, lasting up to eight weeks after psychobiotic intake.

Kazemi, A., et al. (2018). “Effect of probiotic and prebiotic vs placebo on psychological outcomes in patients with major depressive disorder: A randomized clinical trial.” Clinical Nutrition